In this blog post we demonstrate how to create a pH meter using the pH FeatherWing, an Adafruit Feather M4 Express and a few additional components. The meter will display a continuous readout of the current pH and can be calibrated, via button press, at pH values of 4, 7 and 10.

In this example we require the following items:

The pH Feather Wing is capable of measuring both pH and temperature, however in this example we will only be using the pH sensor. In a subsequent blog post we will have examples demonstrating how to use the temperature sensor and how to compensate the pH readings for changes in temperature.

Set-up the hardware onto the tripler base as shown in the images below. 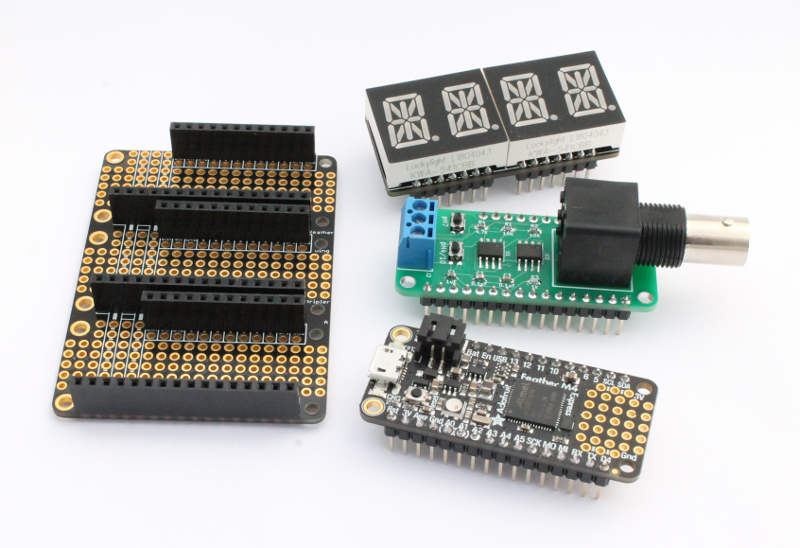 The order in which the components are placed onto the tripler base is not important. However, if you plan on using a battery we have found it useful to position the Feather M4 Express at the top of the tripler base with the battery connnector pointing out as shown in the image above. This positioning makes it easier to connect the battery to the device.

For this demonstration we will use IO Rodeo's pH meter example firmware. The firmware is written in Python and requires that CircuitPython is installed on the Feather development board.

The pH meter firmware continuously samples from the pH probe and displays the current pH measurement on the alphanumeric display.

The firmware enables the user to create a calbration via the "pH 7" and "pH 4/10" buttons. There buttons are shown in the figure below.

In order to start a calibration the buttons should be pressed for one second. The display will then show "CAL" followed by either "PH7", "PH4", or "PH10". The pH 7 value should be calibrated first followed by either pH4 or pH10. The CircuitPython firmware will automatically detect whether the probe is in pH 4 or pH 10 solution. The firmware can use either a 2-point or 3-point calibration.

If the values sampled during the calibration procedure are not within the acceptable range for either pH 4 or pH 10 the firmware will display "ERR" on the alphanumeric display. If this occurs check the solutions and try again.

Resetting to the default calibration

In this example we are use 2-point calibration with pH 7 and 10.

Characterizing LEDs and sample absorbance spectra with a USB spectrometer